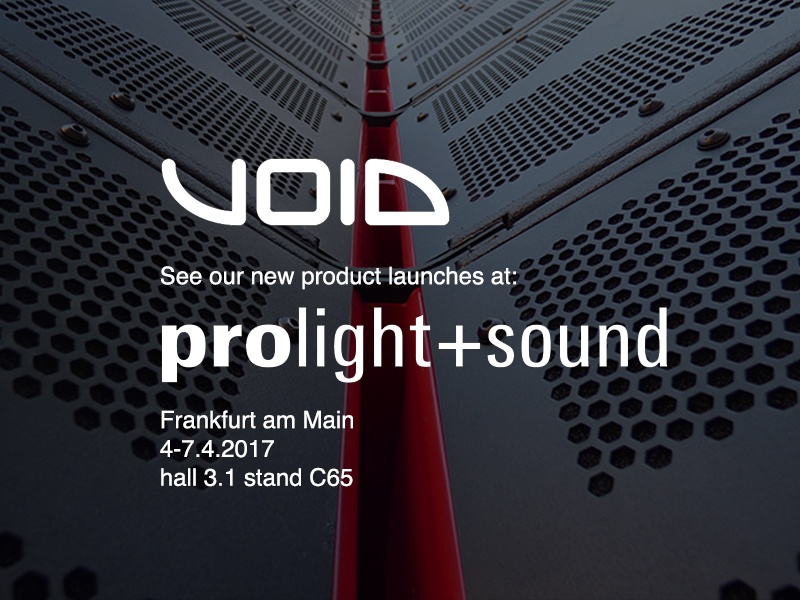 The show starts tomorrow, the fourth of April and runs until the seventh. You can find us in hall 3.1 on stand C65. 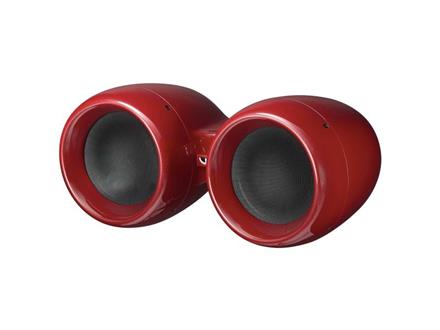 The Airten V3 features a brand new lineup of components to provide improved audio quality, lower bass extension and increased output SPL. The original dual 10” configuration has been kept, with both transducers providing the low frequencies and a single coaxial transducer used for the mid/highs, but the similarities end there.

The advancements implemented in the Airten V3 have made a system capable of truly ground breaking output levels normally associated with enclosures over twice the size of Airten V3, making it an even more attractive proposition. 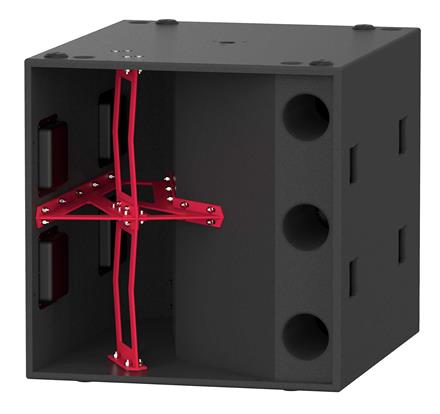 The new single 21″ low frequency enclosure expands upon the 5 resonant chamber theory as used in the ever popular Stasys X; a dual 18” low frequency enclosure which has been the backbone of many Void Acoustics installations around the world. Refining the design principle yet further has led to previously unimagined levels of performance. Transient response and articulation were two of the main design criteria to be addressed first. The use of a large transducer has provided very high levels of efficiency and an extended low frequency response, but a high moving mass can also lead to degradation in speed and articulation.

Strengthening materials have been woven into the cone to provide superior strength whilst lowering the moving mass considerably. A new dual layer coil arrangement has also been deployed to increase both power handling and efficiency whilst lowering the total moving mass to that of a transducer with a much smaller shift. Both these measures have allowed the design to provide the transient response and delivery required for modern styles of music 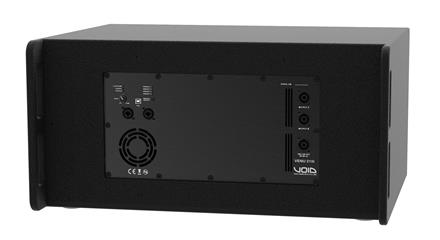 „The Venu 210i is a 600 Watt self-powered double 10” reflex-loaded low frequency enclosure which is capable of powering up to four mid high enclosures from its built-in dual 600 Watt power modules. speakON™sockets are provided for ultra quick and reliable connections and a protected rear connector panel allows the enclosure to be placed against a rear wall without damaging the audio or power connections. The 210i also features DSP that provides loudspeaker control and advanced signal processing capabilities all of which can be accessed by the rear USB port.

The festival is the brainchild of Fuinneamh Productions, Strictly Deep, The Building Society and Techno & Cans. Higher Vision presented a wide variety of electronic music. Ejeca, Dimitri From Paris, Dense & Pika, Julio Bashmore and Denis Sulta headlined the festival which also featured Josh Butler, a house music favourite, and I Hate Models, a techno heavy hitter. Void Acoustics sound systems appeared on four of the five stages at the festival.

Rob Barrett of Fuinneamh Productions: “We’re delighted to have Void Acoustics systems on 4 of our stages and privileged to have the Irish debut of Incubus and the new Arcline 8 system at our festival. We’ve heard and seen the massive impact Void Acoustics has at events worldwide and we felt Higher Vision wouldn’t be complete without their sound systems.”

Ed Rice of Sounds Good: “This was the perfect opportunity to introduce Incubus, Void’s flagship system, to Ireland as well as Arcline 8, the brand new line array from Void Acoustics. The Higher Vision Festival has put together a stunning line up and we will be providing the sound systems to match. This was the first time the legendary system was in Ireland.

UB Stage Tuning, our distributor in Mongola, has recently completed two installation in the capitol of Mongolia. Mongolian magazine Buro 24/7 set out to explore the highest quality sound systems in Ulaanbaatar. From all the places they’ve visited there were two clubs caught their attention. Zu Club at the Seoul Street and CUE + Minimal Bar near the BogdKhaan Museum.

“At these clubs, people do not just listen to the music, they are part of the music. They fuel their body and soul with an energetic music and spread their positive energy all around. With world renowned Void acoustics speakers these clubs were standing out from all other clubs we visited.” – Buro 24/7. 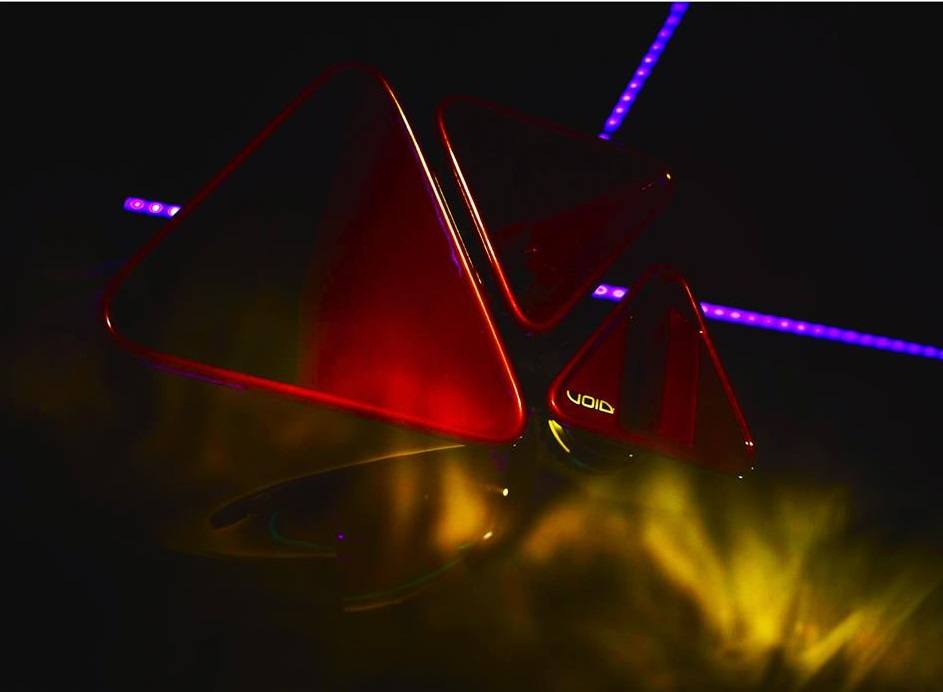 That night CUE+ Minimal Bar were celebrating their first anniversary. All the club guests, including DJ and producer Bodikhuu were saying that the party is super. Bodikhuu also said: “Void Acoustics is showing us the world standard. A week before I played my set in here. Even tough the music was very loud the sound effect remained the same. There were no crackling noises, the music did not lose its sound quality at all.”

By choosing Airten speakers the CUE+ Minimal Bar is bringing the whole new level of sound system. That’s why people who come here feel the best beat and get “high” on music. Club owner, music producer and DJ Munkhtuvshin shared with us, “Void has a very clear sound. UB Stage Tuning company director B. Chinbold introduced me to this amazing sound. That is why I chose Void for my club. I am sure that Void will improve our audience’s musical education.”

Zü club brought a whole new experience to the nightlife of Ulaanbaatar. When guests enter the club they feel like they are actually inside the music. Best DJs in town: Ochiroo, TMK and Henza perform at the Zü club. They play the music that people love. By installing Void’s Trimotion speaker Zü club provides the highest quality sound for their customers. Tokyo, Ibiza and London’s most renowned clubs equipped with Void Acoustics’ Tri Motion speaker.

Club manager Bilguun said, “True music lovers come to Zu club, they have become accustomed to our sound system, therefore wherever our customers go, they can’t find another place with that kind of great atmosphere”.

“Indeed Void speakers give the club guests chance to have fun, when other sound systems with poor quality can be tiring and painful on the ears. Aside from the clubs, Ulaanbaatar’s biggest brand stores equipped with Void speakers. Whether it is the club or the store, we can always hear that clear, high quality sound. In the near future we are certain that Void Acoustics will spread across the Ulaanbaatar and reform our music industry.” – Buro 24/7

The Return of Studio 338 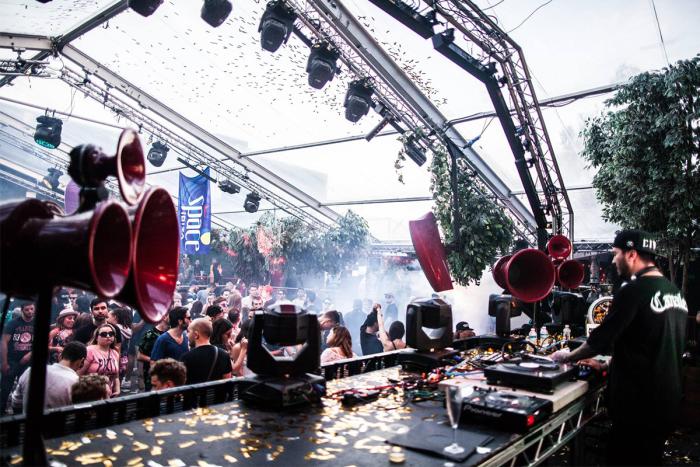 Some excellent news has just surfaced: Studio 338 has announced it will “dance again” this summer after being destroyed by fire last year. There will be a garden opening party on June 3.

Before the fire that destroyed this stunning club, it was home to a vast arsenal of Void Acoustics loud speakers and low frequency enclosures.

We look forward to the return of one of the most notable clubs London had to offer. More news to follow soon.